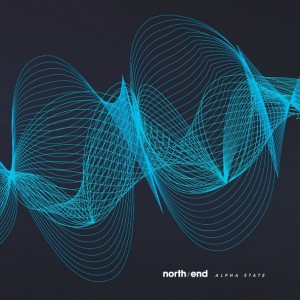 2013 was an outstanding year for melodic instrumental rock releases. Our ears were treated to gems from Waking Aida (‘Hyperdiamond/Allergic’), Wiltz (‘Sea Dog’), Vasudeva (‘Life in Cycles’), Signal Hill (‘Chase the Ghost’), Enemies (‘Embark, Embrace’), and North End (‘Cognoscere’). Each record delivered intricately buoyant tracks, shifting time signatures, sharp u-turns, driving rhythms, and layers of chiming guitars. Follow-up releases from a few of the bands have either landed already (including Signal Hill’s brilliant ‘Alturas’) or will be arriving in 2017. One that I’ve been eagerly awaiting is ‘Alpha State’ from North End. When they reached out the other day with the offer of an advance listen, I was quick to agree and looked forward to play #1 once we were through the wonderful chaos of the holidays. As I expected, ‘Alpha State’ doesn’t disappoint. This blissfully-melodic whirlwind offers the pop-goodness of mid-period Wedding Present, the lush dynamics and forward-movement of 4AD’s Dif Juz, along with the angular rhythms and loops/sways of their contemporaries in the instrumental math-rock scene. The songs have a lighter touch than found on 2013’s ‘Cognoscere’ – the production focuses on the interplay between the guitars, while rhythm perfectly supports the movement with (at times) a more relaxed jazzy tempo. From start to finish, ‘Alpha State’ exhibits the confidence and maturity that develops after a band has been playing together for a long time (check out their press release below to learn more about the band’s history). This release isn’t just ‘Cognoscere’ part 2 – it’s growth and exploration, built upon the core North End-sound that we’ve enjoyed for nearly 10 years. A brilliant release that is highly recommended for all ears. ‘Alpha State’ is available now, so dig in and spread the word! For your listening pleasure, click on the arrow below to hear one of my favorite tracks from the record – Emergence. The full album stream, along with digital purchase/download is available on the North End Bandcamp page –> https://northend.bandcamp.com/album/alpha-state. Keep an eye on their Facebook page for news about upcoming shows.

Philadelphia, PA (January 2017) – North End started in 2008 near Philadelphia, PA and much has changed since those early days. The Alpha State story is a reflection on how the band has evolved over the last 3+ years, from playing sporadic shows in the NY/PA area to moving around the country to becoming one of those bands that does the long distance writing thing. Previously, the band lived within 20 miles of each other, making it convenient to play local shows frequently, write songs, record, and conduct general band business. Now, Marcus (bass) lives in Denver, Russ (guitar) travels frequently for work, KB (drums) just had a daughter, and Pete’s (guitar) career has really excelled. Even longtime recording collaborator Kam (keys) worked on Alpha State in his RV at Yellowstone National Park. Life changes quickly, in a positive way, if you let it, and Alpha State is a culmination of these changes manifesting into the style of music we love to write, play and share.

As a result of North End’s remodeling, Alpha State was recorded uniquely as well. Drums were tracked in KB’s basement, guitars, some keys, and bass were tracked at Pete’s house, mixes were generated by Kam while still in an RV in Yellowstone and tracks were mastered by Paul Gold of Salt Mastering in Greenpoint Brooklyn. If you listen to the closing moments of “Imperial” you can hear the faint sound of rain captured by a single microphone in the park as Kam wrapped up the final edits during mixing. This array of locations and perspectives triggered boundless creativity but still kept Alpha State flowing cohesively.

Alpha State is available through the Brooklyn-based AM 800 Sound, an independent music collective bringing together like-minded bands. Limited 12” vinyl of Alpha State will be pressed and features the artwork of fellow label-mate Rishi Arora of Signal Hill. Following the wide release and distribution of Alpha State, North End plan to play shows in Philadelphia and New York City in 2017.