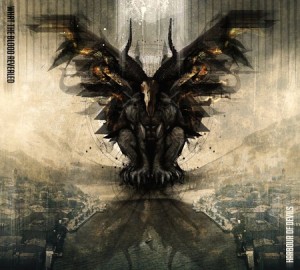 What The Blood Revealed   .   Harbour Of Devils
Field Records, 2012

By then the deck was slick beneath his feet, and the dead and dying lay in heaps on every side. He threw his shield away and sucked in air. “Lord Captain,” he heard the Barber say beside him, “the day is ours.”  **

If you’re a regular 6forty visitor, you already know that I enjoy connecting the site’s content with books that I’m reading. So when I was given the opportunity to write a review of the latest release from Scotland’s What The Blood Revealed, I quickly agreed. Their EPs are on regular rotation here at camp 6forty, and I was confident that ‘Harbour of Devils’ wasn’t going to disappoint. I also had the perfect literary reference in mind, one that I’ve associated with their music since I first heard the early releases (EP1 – December 2010 / EP2 – January 2011), and their massive track on the ‘A Cheery Wave From Stranded Youngsters – Issue 1’ (November 2010) compilation. The fierce confidence and power of What the Blood Revealed’s music consistently reminds me of House Greyjoy, one of the seven great houses of Westeros, featured in George R.R. Martin’s A Song of Ice and Fire series. The above quote is just one of many scenes that graphically illustrates the strength and determination of the Greyjoy’s fleet commander (and mightiest son), Victorion, as he easily overwhelms his enemies at sea. He endures the days of extended calm as his ships hunt for prey, and then unleashes his full fury on anyone who mistakenly ends up in his path. What the Blood Revealed’s latest release ‘Harbour of Devils’ (Field Records) delivers this same intensity – seven slabs of heavy instrumental rock that ebb with moments of restraint, and then hit strong and hard, much like Victorion’s Ironmen.

The record kicks off with the grinding guitars and trudging rhythms of ‘Embrace The Rational And Seek The Truthful’ and ‘To Travel Deadly Ground.’ These two beasts are restless and explosive. I enjoy how the band utilizes the quiet moments to give more power and emphasis to the heaviness throughout the songs. Most of the tracks follow this same format – a dynamic that definitely gives the record an added richness and depth. ‘Waiting For The Storm’ is up next and churns like rolling dark clouds over the ocean  – it’s melodic, yet brooding, and slowly grows in intensity as the song nears its end. But just when it reaches its peak, it transitions immediately into ‘The Streets Ran Red With The Blood Of The Pious’ – 9 minutes of epic instrumental rock. When I listen to this track, I enjoy adding the visual of Victorion Greyjoy leaping on to the deck of his enemy’s ship, ax in hand and kraken helm blazing in the afternoon sun. Next up is ‘Eyes To The Horizon’ – once again, relaxed and calm rock music to start, but slightly different than the others since its build is slower and much more melodic, with the last few minutes highlighted by a very lyrical lead guitar, weaving its tale cleanly on top of the solid rhythms.

And then there were two… I first heard ‘The Corporation As We Know It Is Dead, Dead, Dead’ on the ‘Cheery Wave’ compilation, and 7 minutes 30 seconds later, I was completely consumed by the power of What The Blood Revealed. Grinding, ominous, and unsettling – a post-metal anthem for our struggling world. Closing out the record is one of my favorite tracks from What The Blood Revealed – ‘Cast Adrift In A Harbour Of Devils.’ This massive beast is so perfectly heavy – it’s best when played at full volume so the low end rumbles through your body like a freight train. This would definitely be Victorion Greyjoy’s anthem – powerful, complex, and intensely driven.

What The Blood Revealed’s ‘Harbour of Devils’ is an outstanding rock record, and definitely one of my favorite releases of the year. The only thing that would make this listening experience better for me would be if I were in a pub enjoying a fine cask-drawn ale, while the band cranks through these beauties on stage. Spring tour with Alright The Captain? Sounds good to me. Now if only someone would invent the damn transporter…